A BBC interview on the correct Islamic stance towards terrorism and terrorists. 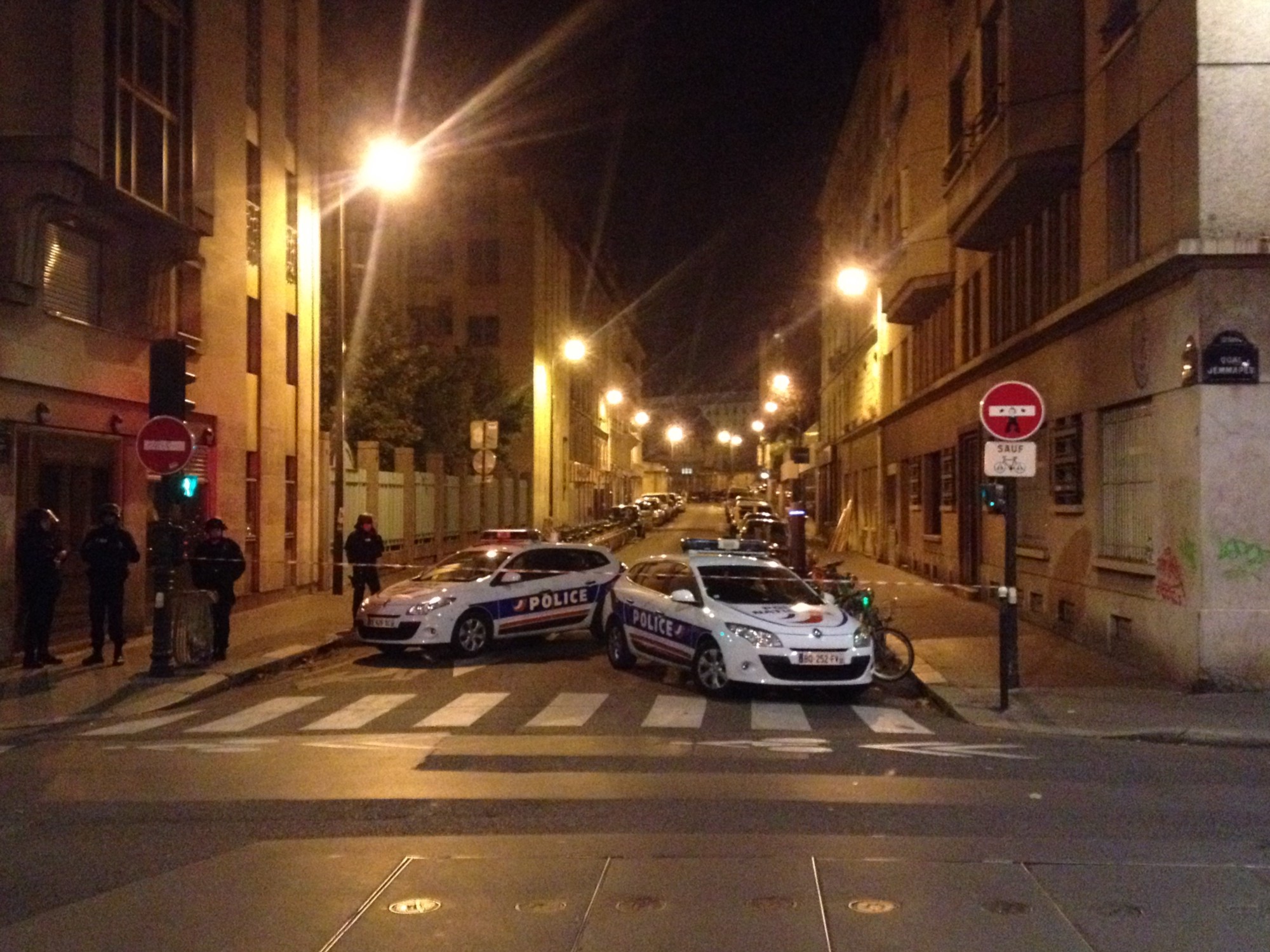 Just a flavour there what’s been going on in Paris, away from France. Women in Islām was one of the main topics being discussed at a special event yesterday by the guest speaker Abū Khadījah ʿAbd al-Wāḥid. Many Muslim men and women gathered at the Guild Hall in Gloucester. And not only did they discuss a variety of Islamic topics and issues, but, they were also able to take away literature explaining the faith in more detail. I managed to get Imām Abū Khadījah's reaction to the terrorist attack in Paris.

Abū Khadījah, I was listening to your lecture and as an Imām and somebody who educates Muslim people, I was very pleased to hear that you were telling the congregation, a lot of men here, they should not follow any group that promotes terrorists or terrorism, including ISIS.

Absolutely. Our position for many decades have been very clear. All forms of extremism regardless of which direction they come from, which group of people they come from. We completely and utterly condemn it. Whether it be killing of Muslims, killing of non-Muslims, in a Muslim country, in the Western world.

I remember going right back to 1993 when the Trade Centre was bombed for the first time in New York, and eventually ʿUmar ʿAbd al-Raḥmān was convicted in the United States for that. I remember even in those days, we were at the forefront of condemning that type of behaviour because we believe that this type of ideology is rooted in a sect that arose in the time of the fourth Caliph of Islām, and his name was ʿAlī, may Allāh be pleased with him.

And they rebelled against him, so these people aren’t just rebellious against non Muslims, they’re rebellious against Muslims. They will shed the blood of men, women, children, young, old, without mercy. And whether that person happens to be a Muslim or non-Muslim really doesn’t count as far as they’re concerned.

And this is why you find that in many of these terrorist attacks, they will just as easily kill Muslims as non-Muslims. And of course, killing of any soul, innocent soul, unjustly, is condemned by any right minded person and more so, by the religion that Muḥammad (peace be upon him) came with.

The situation in France, obviously, these so called Muslim people, they judge that these journalists or cartoonists did something wrong. And they were actually passing on judgement on them and punishing them for it. Is that right? Or were they wrong?

They have no authority to pass on punishments or imprison anyone or to fine anyone. They have no right to do anything like that; that is the right of those in authority; those in government; those who have the apparatus in government and the court. That’s why we have the court system in the Muslim countries.

Now, just because someone gets away with something, or you believe someone has gotten away with something, vigilantism is something that is condemned and forbidden in Islām. Islām is an ordered religion, with an ordered structure of leadership, government, courts, police, judiciary and so on. So, going into a press office with a Kalashnikov, with bombs, and killing everyone inside and then leaving that building and killing police officers in the street, all this does is bring about an image in the minds of non-Muslims that Islām is a barbaric religion, and nothing can be further from the truth. Even if one looks at the Prophet Muḥammad (peace be upon him) and his disciples, you will find that they were the most generous, and the most kind and the most merciful and the most easy going of people. Even if they had a neighbour who has a Jew or a Christian, they would never allow him to go hungry!

So, with regard to what took place yesterday, these individuals, or the last few days, on Wednesday, then what you find is that these people are actually an offspring, an offshoot of their masters who are ISIS in reality. Their ideology is driven with the same ideology that drives ISIS. These are murderous individuals who only yesterday, they were thugs, and street robbers, and drug dealers, and all of a sudden, overnight, they become vanguards of Islām, defending the honour of the Prophet?! The Prophet described them actually, in an authentic tradition, the Prophet (peace be upon him) said that there will appear a people, they will enter Islām and exit Islām just like an arrow shoots through its target.

So,  obviously they think they’re defending Islām, and Islām’s name, and Prophet Muḥammad’s name. In God’s view, or in your view, what do you think God will actually do with them? Will He welcome them into Heaven, because they think they’re going to go to Paradise?

Meaning, that it will not sink into their hearts. They have no understanding of the Book that they are reading. So, them actually considering themselves to be welcome at the gates of Paradise, entry to Paradise? In fact, we say the opposite! That these types of activities lead to the Wrath and Anger of Allāh. Not His Mercy, because if you’re not merciful to others, then God is not Merciful to that person. And that is an authentic tradition of the Prophet Muḥammad (peace be upon him), that he will not be shown Mercy.

We just heard the condemnation from Abū Khadījah ʿAbd al-Wāḥid. Now, with the event in Paris this week, the attention yet again has turned to the Islamic faith as we were hearing earlier, an Islamic event took place yesterday at the Guild Hall Art Center in Gloucester. They were designed to give non-Muslims correct and authentic information about Islām. Abū Khadījah ʿAbd al-Wāḥid from Birmingham, delivered two talks, one about Salafism and the other, women in Islām.

As far as who are the Salafīs, then that would basically explain what it means to be a Salafī in a sense, which is to follow the disciples of the Prophet Muḥammad, to take them as the example and the model to be followed, so when we measure the various Islamic sects that are in the world today, whether it be ISIS, or the Shiites, or other than them from the politicised radical groups and so on. Then we measure their message with the message of the disciples of the Prophet Muḥammad (peace be upon him). If it matches, then we accept it. If it opposes, then we reject it.

So, the measure between truth and falsehood in Islām, theologically speaking, is what the disciples of the Prophet Muḥammad (ﷺ) took from directly by way of Revelation of the Qurʾān and by way of understanding of the Prophetic tradition.

Now, going on to the second talk, women in Islām, what’s your message there?

With regard to women in Islām, then, it is basically to portray that actually if you compare what Muḥammad (peace be upon him) was sent with by his Lord, you will find what he brought for the women: honour, respect, rights, that they are not to be harmed, that they have duties – they have duties for themselves before their Lord. And that men, they are responsible for much of the care for the women.

Now, giving a Muslim woman her right, doesn’t necessarily necessitate that there is equality in between the two sexes. Men and women are different.

So is there equality in Islām for women?

Who gives the reward?

The reward is God given; it is God who created women, and it is God who created man. It is God who commanded the men and it is the same God who commanded the women. So, these regulations in Islām are not man made. We don’t say the Law Maker is a human, or even Muḥammad; rather, God is the One who revealed it to Muḥammad (peace be upon him) and all of the Prophets: Jesus, John and Abraham, and Moses and so on. So, these revealed messages came from God through those Prophets and they were given to men and they were given to women. So their roles may be different but it doesn’t mean their reward is any less because the highest echelon of Paradise are equally for men, pious men, as they are for pious women.